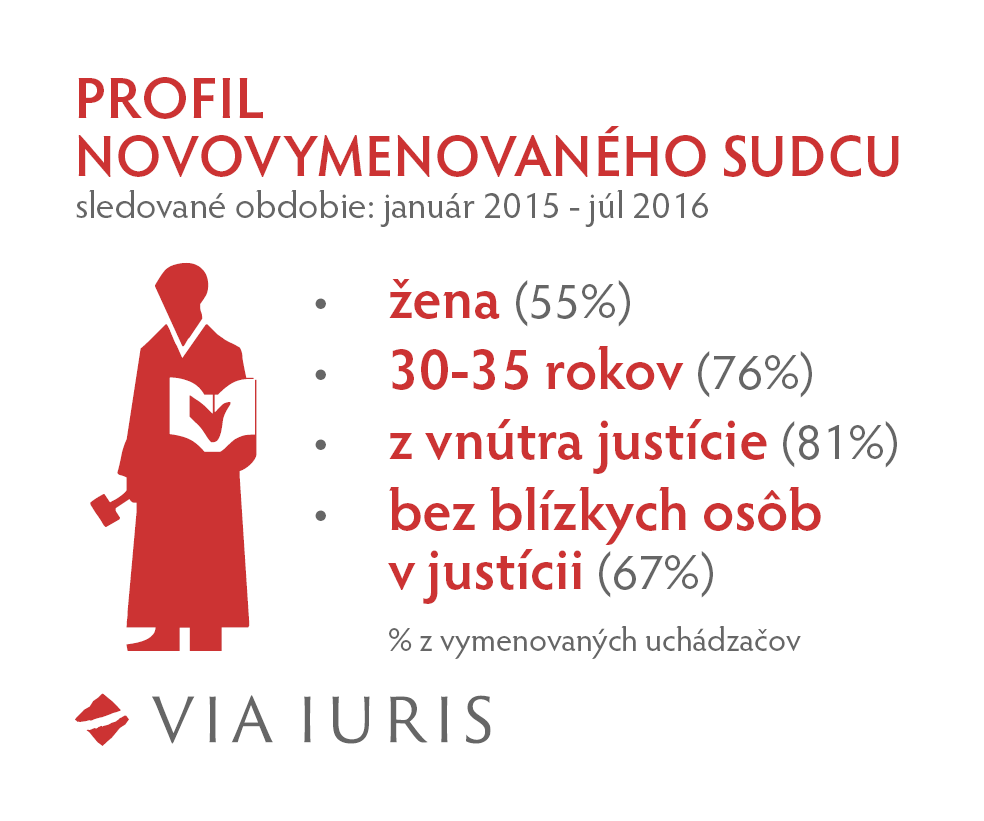 Among new judges are mostly women under 35 years

Between January 2015 and May 2016 VIA IURIS monitored 46 selection procedures for posts of judges on District Courts with 563 participating candidates. From all of those candidates only 215 successfully passed all parts of the selection procedure (written part, psychological test, and oral part). Out of these successful candidates President of the Slovak Republic appointed 58 new judges.

What is the profile of a typical newly appointed judge?

Newly appointed judges were mostly women 30-35 years old, who had passed a judicial exam, with no relatives in the judiciary.

It stems from the monitoring, that 33% of appointed candidates have close person in the judiciary. These are close relatives (direct relatives, siblings and husband, also other persons in a family relationship or similar type of relationship, where the damage suffered by the candidate would be rightly felt by that person as his/her own damage.) Comparing to other candidates such candidates are finally more successful in obtaining the posts of judges. From among all candidates attending selection procedures only 17% have close persons in the judiciary.

„Similarly to other professions even in the judiciary it is natural that children follow professionally their parents, however results of the monitoring raise doubts about the objectivity of the selection procedure. So it is very important that the selection procedure of new judges is set in a manner to guarantee objectivity and to avoid risk that position of the judge becomes family privilege,“ warns Kristína Babiaková, attorney cooperating with VIA IURIS.

From the point of view of the age the most of candidates interested in the position of judge (81 %) and even those who were finally appointed as judges during the monitored period (76 %) were persons 30 – 35 years old. Abroad the trend is similar, however there exist mechanism that with progress of time evaluate judges’ performance. An example is the appointment of judges for a precisely determined period of time after which their capacity to exercise the function of judge is revaluated. We lack such a mechanism in Slovakia. In such case is still relevant a controversy whether candidates in the age of 30 are professionally and personally prepared to hold lifetime post of a judge.

Up to 4/5 of appointed judges come from the area of the judiciary. They passed a judicial exam and later worked as court clerks. Only 1/5 of new judges have previous working experience from advocacy. Between 2011- 2013 it was 1/4. VIA IURIS considers that judiciary should be open to other professions because it brings there a diversity of opinions, other professional experience, and knowledge of application practice which can contribute to a higher quality of decision-making. Monitoring was carried out before the establishment of the obligation of the initial training for candidates from other legal professions. In future it will thus be important to assess whether such condition may not discourage candidates who do not work in courts.

Proportion of appointed men and women is balanced (55% in favour of women). In comparison with past monitored period the proportion of women decreased of 8%. In case such trend will continue in the future, it may lead to a progressive defeminisation of the judiciary, where currently work 66% of women.

VIA IURIS carried out a similar monitoring in the period between 2011-2013. Results were very similar. A typical appointed judge was also a woman, 30-35 years old with a judicial exam, without relatives in the judiciary.